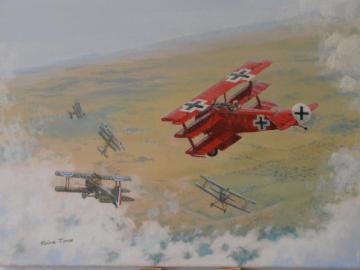 Description:
Original unframed pencil drawing of a Harrier "Jump Jet" flying a low-level training sortie over Derwentwater in Cumbria. As any aircraft enthusiast knows, a beautiful piece of scenery like this can only be enhanced by the sight of a low-flying aircraft! My thanks to Ian Murdoch for the aircraft reference photograph. The background is from my own reference, inspired by watching military jets practising low flying exercises through the beautiful valleys of the Lake District. Image size 15" x 12" (380mm x 300mm) The Harrier first flew in the UK during the late 1960s and was the first V/STOL (vertical/short take off and landing) aircraft, designed to make use of small, concealed or improvised bases, such as forest clearings, without the need for long runways. The Hawker Siddeley Harrier was used by various air forces, including the RAF and USMC, while the Sea Harrier was flown from aircraft carriers while in service with the Royal Navy and the Indian Navy. A later generation was developed in the 1980s as the AV-8B in the United States and in Britain as the British Aerospace Harrier II. However, the Harrier has now been withdrawn from service with most users, to be replaced by the F-35B Lightning II. The last operational Harrier flight in the UK took place in 2010.
By: Elaine Jones
Price: £120.00
View Art Details View Artist Gallery

Description:
What better bond of friendship than the trust between man and his dog? This loveable new addition to the pack will reward the master a hundredfold for his patient training with affectionate licks and bundles of loyal energy. Painted in acrylics on a 40x50cm canvas ready to hang. All sides are painted, as per Gallery hanging requirements. The work is signed on the front, and a Certificate of Authenticity is included in the purchase.
By: Jackie Charley
Price: £350.00
View Art Details View Artist Gallery 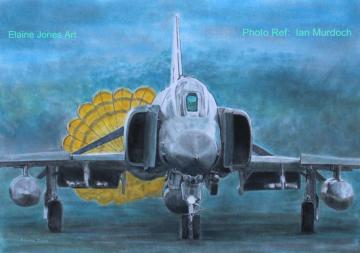 Description:
Original unframed pastel painting by Elaine Jones, 19.5" x 13.5" (50cm x 35cm) on Pastelmat board. My thanks to Ian Murdoch for the amazing reference photograph. (Please note watermarks do not appear on original painting or prints.) A Phantom returns to base at Lossiemouth in Scotland, its yellow brake chute streaming behind.
By: Elaine Jones
Price: £130.00
View Art Details View Artist Gallery 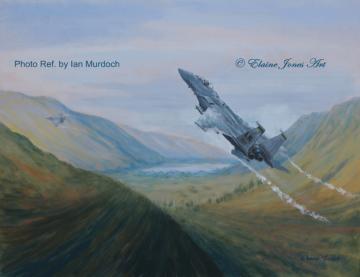 Description:
Abstract in hues of blues, with white and flecks of 24kt gold leaf, including a gold heart. THEY'LL BE BLUEBIRDS is in respect of Remembrance Day, with the words reflecting on the painting of the white cliffs of Dover. Layered texture has been used to create the sea and landscape. Artwork comes complete with fixtures and fittings and a Certificate of Authenticity.
By: Susan Harvey
Price: £90.00
View Art Details View Artist Gallery

Description:
Silhouette soldier embraced by the poppy leaf. Poppy has been painted on original and vintage music paper, and slightly aged. Framed in a distressed wood effect frame with perspex cover which is less reflective than glass and safer.
By: Susan Harvey
Price: £45.00
View Art Details View Artist Gallery

Description:
Silhouette soldier enfolded under a poppy leaf. Poppy has been painted on an original and vintage music sheet paper, and framed in a distressed wood effect frame with perspex, which is less reflective than glass and safer.
By: Susan Harvey
Price: £45.00
View Art Details View Artist Gallery 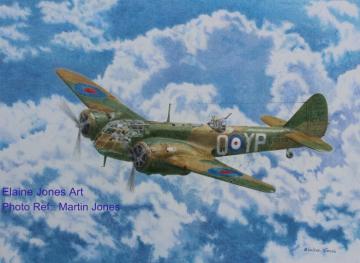 Description:
Pencil drawing of Bristol Blenheim flying above the clouds. The Bristol Blenheim was a British light bomber built by the Bristol Aeroplane Company and used in the early years of the Second World War. The all-metal aircraft was powered by Bristol Mercury radial engines and carried a crew of three. Many thanks to my son, Martin Jones, for the reference photograph.
By: Elaine Jones
Price: £100.00
View Art Details View Artist Gallery