Gallery About the Artist

Description:
Title, In passage An old fishing boat lays abandoned on the shingle beach of Dungeness in Kent. She's in passage to a point in time where she will no longer be recognisable as a boat but merely debris littering the beach and finally minute fragments between the stones. The seagull a passenger for a brief moment in the time of her journey. These boats need to be remembered .
By: Martin Pollock
Price: £420.00
View Art Details 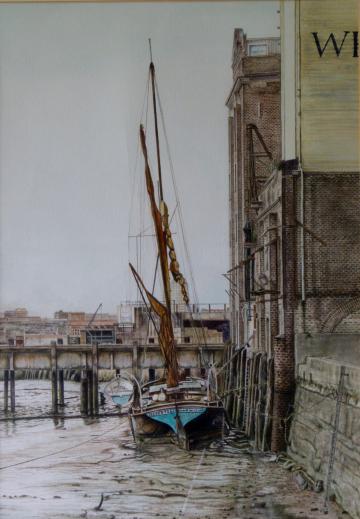 Description:
A Thames barge is moored alongside a wharf at Chelsea in London, I took the photograph that I used for the painting in 1988, by then both the barge and the wharf had been outmoded for a long time, their purpose of use altered from being worked by occupation and commerce to becoming abodes to be lived in. Change didn't destroy them but it did destroy the ways of life they supported.
By: Martin Pollock
Price: £500.00
View Art Details 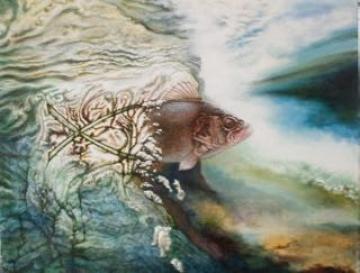 Description:
Original Acrylic on canvas. This painting is a departure from my usual subject matter but because of its marine aspect is still within it. The image depicts a fish breaking loose from a submerged cliff face, much like an infant being born, separated from the cradle that gave it life and emerging into the world. The fish represents an idea to some and a way of life to others, it is immortal, over two thousand years old and has been followed and is still followed by millions of people today in the sea of life.
By: Martin Pollock
Price: £450.00
View Art Details
Back